“The next decade is going to be the decade of mobile, where a new social network will be born around audio and video, and this social network will be around conversations and not broadcast.” Vikas Malpani has the perfect pitch for his Leher app, being touted as an alternative to the invite-only audio-chat app Clubhouse.

Malpani, who co-founded Leher with Atul Jaju in 2018 — the duo also launched real estate marketplace CommonFloor — says there is a perception that Indians are not good at building global products and it’s time to change that. “We believe we have a good chance of uniting the ecosystem and bringing people here for conversation,” Malpani tells indianexpress.com in an interview.

While everyone is now talking about the Leher app and the concept of a social network based on audio-video chat, Malpani says he always wanted to build a social network for the new era. Facebook may be the world’s most popular social network, but over time it has started to look like a “self-expression” platform and its popularity has taken a hit. 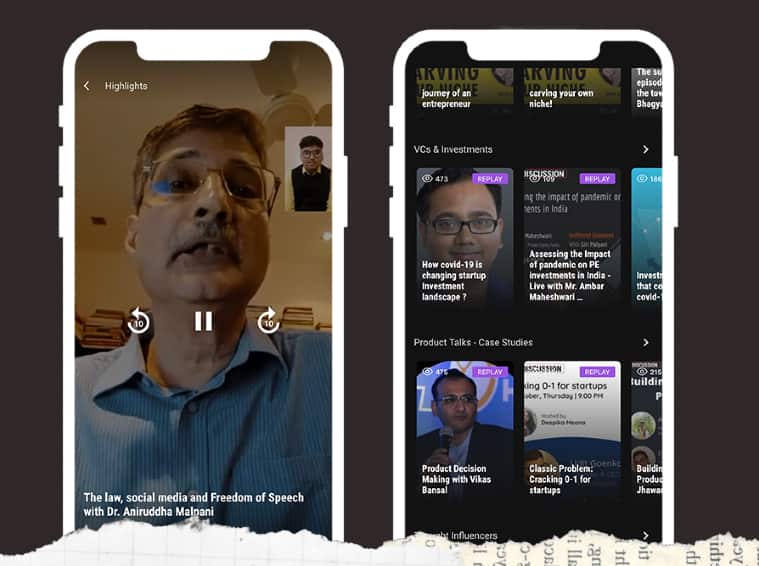 Malpani thinks of Leher as a social network that builds a conversation. “A social network is built on a basic human belief and it’s the hardest thing to build, because the daily needs are not transactional needs rather human needs,” he adds. The current social networks, Malpani feels, are becoming platforms to consume content and not initiate a conversation and thus people are getting more alienated.

Leher demystifies the social network we know. “We wanted to build a place where you could come and have great discussions around topics of your interest with people who are also interested in the same thing and get various perspectives,” Malpani explains.

Unlike Clubhouse, which is an audio-only chat app, Leher is an audio-video platform where users can listen in to conversations, interviews, and discussions between like minded people on various topics. It’s an open platform and within the platform, there are clubs that are invite-only. Some clubs are run by people with more exclusivity and some of these clubs let people join in via request. In a way, there are elements of Zoom, podcasting, and houseparty; that makes Leher a unique platform.

“What do you need when you are feeling lonely? You need human connection… you need to be heard… you need to be felt cared for and you want to belong to people who understand you. Audio and video can solve these very well,” he says. Malkani is aware that Leher is being compared to the exclusive invitation-only social networking app Clubhouse, which has celebrity users like Elon Musk and Oprah Winfrey. He, however, dismisses the notion that a Made-in-India app like Leher should be categorised as a “desi” alternative to Clubhouse. “We are better than Clubhouse,” he says, adding that “we want to build a product which is competitive at a global stage.”

He lists the differentiators with Clubhouse: “We are fundamentally more rich and we offer more options to users. We’re already on iOS and Android and we have audio and video. We have clubs which are moderated by the users and rooms which are self-moderated, so anyone could actually jump in and have a conversation.”

The popularity of Leher has soared in the past six months. There are over 150,000 downloads across Android and iOS and the download numbers have doubled in the past week or so. Malpani, however, did admit that the buzz around Leher was limited six months back but now a lot more people are aware of the platform and what it offers.

The idea that Leher is an audio-video chat social network where you listen to conversations and participate makes it different from popular social platforms like Facebook and Twitter. That pitch is what makes young professionals, with similar mindset and vision, jump on to Leher. “They are professionals… they want to build a network around that. They are the ones who have a lot of things to share,” he said.