Ten years ago, Intel launched its Thunderbolt tech, which was commercially available with the 2011 Apple MacBook for the first time. The connection standard allowed the transfer of data quickly among PCs, docks, monitors, solid-state drives, external hard drives and cameras, all using one single port.

The Intel Thunderbolt technology has evolved a lot since, and today, a decade later, it is represented by the Thunderbolt 4 standard that launched in 2020. As Intel celebrates ten years of the technology today, here are some lesser-known facts from the Thunderbolt history books.

The fundamental idea behind the Thunderbolt was conceived in 2009 when Intel came up with Light Peak, a single multi-functional port that could eliminate the need for multiple ports for transferring various forms of data. Thunderbolt was capable of doing this by dynamically switching as per the connected devices.

Apple was the first brand to use Thunderbolt in its products

The first company to use Thunderbolt tech was US-based Apple. The company used the port in its 2011 MacBook Pro, and followed up by equipping its latest iMacs with Thunderbolt in the same year. When Thunderbolt 2 was announced two years later in 2013, Apple was again, one of the first brands to implement the tech, this time in its 2013 Retina Macbook Pro laptop.

Early Thunderbolt tech was based on a Mini DisplayPort connection

The first and second-generation Thunderbolt technology were based on the Mini DisplayPort connector (MDP). The very first Thunderbolt connection could transfer data at speeds of up to 10GB/sec which was twice as fast as USB 3.0 at the time, which maxed out at 5GB/sec. 2013’s Thunderbolt 2 doubled that speed to 20GB/sec but was still based on the MDP port.

It was in 2015 that Intel switched from the MDP connection to USB Type-C. Announced at the 2015 Computex, Thunderbolt 3 was again twice as fast as Thunderbolt 2, now offering data transfer speeds of up to 40GB/sec. The new connection was also backwards compatible with regular USB Type-C connections. 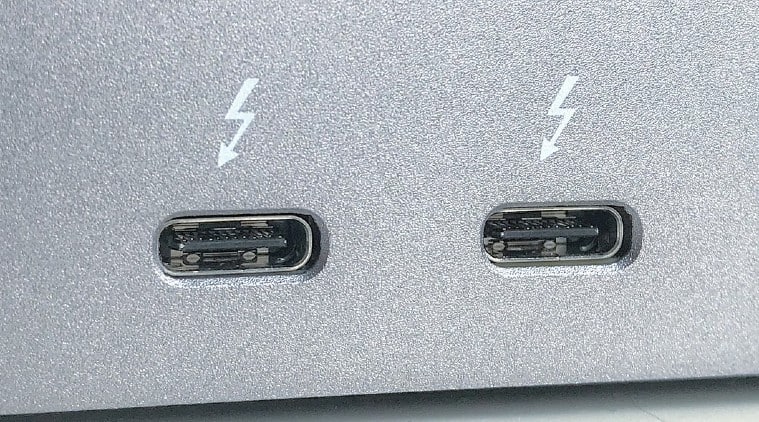 Intel Thunderbolt 3 was the first in the series to use the USB Type-C design. (Image Source: Wikipedia)

Today, Thunderbolt 4 is not faster than Thunderbolt 3 but adds more capabilities including support for two 4K displays, four total ports instead of one or two ports and universal 2-meter-long 40GB/sec cables.