Realme X7 Pro 5G review: Realme X7 Pro is the latest mid-range smartphone from the brand. With this 5G-ready mid-range device, the company aims to take on the competition by offering a flagship processor, 65W fast charger, AMOLED panel, and stereo speakers at around Rs 30,000. Realme is offering the top-notch Mediatek Dimensity 1000+ chipset with X7 Pro.

The Realme X7 Pro will be seen giving tough competition to OnePlus Nord and Xiaomi Mi 10i, though it has a higher starting price compared to the Xiaomi device. Is this the best 5G-ready flagship killer phone? Read our review to know more.

Realme X7 Pro: What is good and bad?

The Realme X7 Pro offers a premium design and feels very good to hold. The device has a matte surface with a frosted glass finish, just like OnePlus 7T. The Mystic Black colour model of the X7 Pro looks beautiful and classy. The colour of the back panel shifts from bluish-grey to pink and yellow when you look at it from different angles in the light. The phone also has a  massive placement for Realme’s ‘Dare to leap’ branding, adjacent to the camera module. The back panel of the Realme X7 Pro (Image credit: Ankita Garg/Express image)

The back panel didn’t attract fingerprints, though, the device is a bit slippery. The bundled case should offer relief to users. Just like OnePlus Nord, there is no headphone jack here. So, if you haven’t yet upgraded to wireless earphones, now is the time to do that as the mid-range segment is gradually getting rid of the audio jack.

The phone has a USB Type-C port and stereo speakers with support for Dolby Atmos. The speakers sound great while gaming. One will also enjoy binge-watching content on this device as sound output is impressive for the price. It is clear and loud enough with some depth. The Realme X7 Pro has a 6.5-inch FHD+ display. The device features slim borders around the display and the circular notch on the top left corner is not as small as seen on some of the smartphones. There is no support for HDR 10+, unlike OnePlus Nord.

The display renders vibrant colours and deep blacks. We had no issues in viewing the device’s screen in harsh sunlight. The 120Hz refresh rate did make browsing or navigating around the interface smoother. The day-to-day performance of the smartphone was a breeze and the multi-tasking experience was also smooth. The Realme X7 Pro packs MediaTek’s flagship Dimensity 1000+ processor. We played Genshin Impact open-world game with graphics set to Medium and the performance was very pleasing. However, when graphics and other settings were set to High, we saw noticeable lag and stutter. The back panel of the device got warm after 60 minutes of gameplay.

The in-display fingerprint sensor is very fast to unlock the X7 Pro. The new handset from Realme comes with support for 5G. While India is yet to get this feature, it is good to have a future-ready device at an affordable price. The company is shipping the device with Android 10, just like Xiaomi Mi 10i. Realme is one of the brands that never fail to offer the latest Android OS, which is why it is quite surprising. Nevertheless, you get features like Always-on-Display (AOD) with several Digital and Analog styles. Realme should introduce the Insight clock style-like feature found on OnePlus phones. It gives you an insight into how much you have used your phone and unlocked it. You also have the Digital Wellbeing feature on the device. I would like to mention that Realme’s native apps take a certain amount of space and you can’t even uninstall those, which is quite annoying. 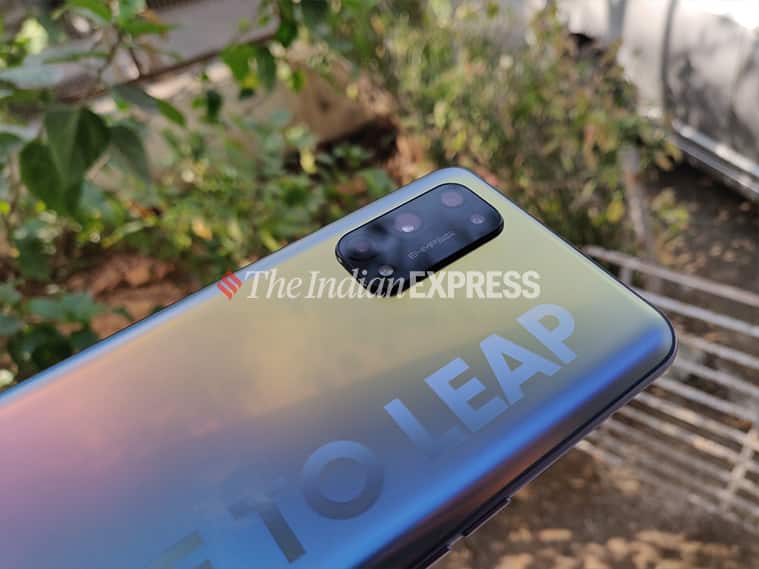 The Realme X7 Pro has a decent set of cameras, including a 64MP Sony IMX686 sensor, an 8MP ultra-wide-angle camera, a 2MP monochrome portrait sensor and a 2MP macro camera. On the front, there is a 32MP selfie shooter.

In daylight, the device proved to be a mixed bag. The main rear camera managed to offer some decent shots with accurate colours and plenty of details with 64MP mode. However, in harsh sunlight, the X7 Pro often struggled with dynamic range and delivered soft details with washed-out colours.

The camera captured the cat and the fruit shop with lots of details, accurate colours and sharpness. However, the one with the cat is slightly overexposed and the fruit seller’s face is not bright enough. A few shots were also a bit overexposed or underexposed. But most of the shots captured using the phone were decent enough to post on social media.

Street shot taken with the primary main camera of Realme X7 Pro.
As you can see, the white portion is a bit overexposed. The camera did offer a sharp and detailed photo, which is visible when you zoom in.
The image has an average dynamic range with washed-out colours.
Another image with above-average dynamic range.

The ultra-wide-angle camera has weaker details and colour reproduction is also average. The same is also the case with portrait shots. The camera took images with minimal details, below-average sharpness, edge detection and background blur. I did like close-up shots.

Users will get detailed macro shots in daylight with good colour accuracy. The device locked the focus on subjects quite quickly. The night mode did offer us a much brighter and colourful picture, but with visible noise and minimal sharpness.

One of the biggest key selling points of Realme X7 Pro is its 4,500mAh battery with support for 65W fast charging. The provided charger is really a saviour in situations when your phone has 2 percent battery and you need to step out of the house for some work. We got 40 percent charge in about 15 minutes, which is just great.

The bundled charger took 35-40 minutes to fully charge the device from zero to 100 percent. With 2-3 hours of gaming, a bit of social networking and a few photography sessions, the device managed to last a day. Do note that the results will vary depending on your usage pattern.

Realme X7 Pro review: Should you buy it?

Realme X7 Pro is a great flagship killer smartphone, but the price is a little on the higher side, compared to the competition. Nevertheless, you are getting a robust performance, AMOLED panel, long battery life with 65W fast charging support, and of course 5G support for Rs 29,999. The mentioned price is for the 8GB RAM + 128GB storage model. The camera performance of X7 Pro is a hit or miss. Do note that the device ships with Android 10 and lacks a headphone jack. Alternatively, there is the Xiaomi Mi 10i, which has an excellent camera experience, audio jack and good overall general performance at a lower price.

With Realme’s Upgrade program, you can get the Realme X7 Pro for Rs 20,999. However, you will be required to upgrade to the next-generation Realme X series phone, which launches next year by paying 70 percent price for that future phone. If you don’t wish to purchase the new device and want to stick with the X7 Pro, then you will have to pay the remaining amount of Rs 9,000 later on.

Previous Article Farm leaders have constructed a movement by repeating misinformation, undermining national unity
Next Article Attempts to restrict farmers' peaceful agitation violate promise made to citizens by framers of our Constitution