Watching a young Steve Jobs, dressed in a fine black suit and bow tie, unveiling the Macintosh in 1984 can give anyone a sense of deja vu. Those in the tech fraternity call that moment the beginning of a new dawn for personal computers with Apple at the helm of it. More than 36 years have passed since then, and while Jobs is no longer with us, the Mac remains integral to Apple. No wonder the Mac is the longest-running product in the history of consumer technology, and it’s getting stronger with each passing year. Known for its easy-to-use interface and minimalistic designs, the Mac has a glorious history. Each model has a legacy, and although some Macs have become classics, some systems, well, are least talked about. That’s why we’re looking back at those three less talked about Mac models and revisiting them again.

The Twentieth Anniversary Macintosh (or simply TAM) will always be known for its unusual take on personal computers. Released back in 1997, the TAM was a sort of high-end sports car, an experiment that proved pivotal for Apple and its future products. It had a price tag of $7,500 and only 11,600 units sold. Legends have it that the TAMs were delivered to customers in a limo by staff wearing tuxedos, who would set up the computer and explain to them how to use the device. The TAM, as we know it, was an all-in-one, flat-screen personal computer as opposed to something with the heavy, oversized CRT monitor. Code-named Project Pomana, the idea was to create the first computer for the home.

Retro tech: The forgotten Apple gadgets nobody talks about anymore The TAM, which had a flat-screen all-in-one design, was launched in 1997 at a pretty hefty price of ,499. (Image credit: Wikimedia Commons/Morn)

The TAM had an LCD screen just like a laptop and it came with the Bose-designed sound system, complete with a CD-ROM drive. It could also play TV and FM Radio. The objective really was to design a computer that mimicked a home entertainment system. Unfortunately, the TAM was discontinued within a year. Apparently, Steve Jobs hated the TAM. Not to forget the TAM was launched at a time when Apple was in bad shape. It is said that a lot of people within Apple did not want the TAM to be launched as it was still a prototype device. But Apple CEO Gil Amelio, who was leading the company at that time, was in the favour of releasing the Twentieth Anniversary Macintosh. Although the TAM wasn’t a success, it did, however, solidify Jony Ive’s position at Apple. Today the TAM is worth a huge amount of cash, selling as high as $4500 on eBay.

The early 90s of Apple look a lot different from what it is today – but the vision to create practical products is something integral to the Cupertino giant. The PowerBook Duo is easily one of the most distinctive products Apple has ever created, but sadly, it never got the credit of upending the laptop market. The PowerBook Duo was a modern-day MacBook Air and to achieve that portable design, Apple had to remove the floppy drive, limit the screen size to 9-inches, and include a smaller keyboard. It was still a thick machine but not as bulky as some of the other laptops of its time. The company knew the PowerBook Duo had a lot of shortcomings but Apple offered a solution to address the issue of expandability and connectivity. The PowerBook Duo was an attempt to create a hybrid computer. (Image credit: Wikimedia Commons/Dpaanlka)

The solution really was to create a docking station called Duo Dock that could transform the PowerBook Duo into a full-blown desktop. The VCR looking dock included a floppy drive, an additional hard drive, additional ports, and supports an external monitor. The vision was to attach a monitor on top of it, a keyboard, mouse, and printer attached to it, and slide the Duo into the tray of the Duo Dock. It wasn’t a perfect solution as the integration wasn’t as smooth as advertised. That being said, the idea of the Duo Dock was crazy. In a way, the PowerBook Duo tried to push the concept of a hybrid machine or combination of a laptop and desktop computer that has features of both. The Duo line was killed off by Apple in 1997, a year before Steve Jobs officially took over the reins from Gilbert Frank Amelio.

In 1989, Apple introduced its first battery-powered Mac, and the idea was to create a portable Mac that was as powerful as the desktop. The Mac Portable was a really good machine. It featured a 9.8-inch monochrome active-matrix LCD screen, a full set of ports and a full-sized keyboard, a trackball, and a lead-acid battery which Apple claimed would last 10 hours on a single charge. The Mac Pro also had a shoulder carrying case with a shoulder strap. Despite Apple’s backing behind the Macintosh Portable, the machine flopped. The reason: the Mac Portable wasn’t a portable Mac that many consumers were looking forward to. The Mac Portable was four inches thick and weighed 7.25 kg. 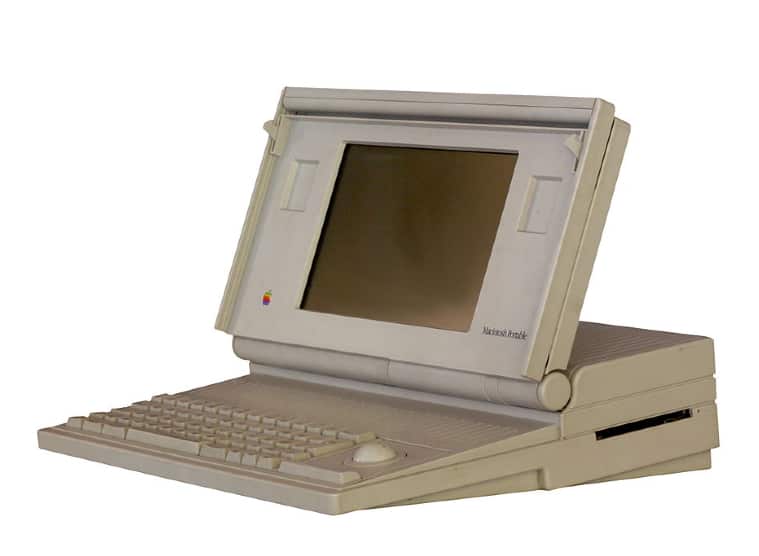 As soon as Apple product chief Jean-Louis Gassée showed off the Mac Portable on a stage in Universal City, California, the device was immediately dubbed as “luggable” by the press. Apple was also conscious about marketing the Mac Portable, hinting that the company had a fair idea of how the product will be received. The Mac Portable was a technical marvel, an engineering wonder that’s hard to pull off. As criticism starts pouring in, the Mac Portable’s sales hit the big time. In 1991, Apple discontinued the Mac Portable and replaced it with the PowerBook line. As you can imagine, Apple’s first portable Mac wasn’t instantly popular and, as such, it soon lost to obscurity.