Hayley Arceneaux, 29, had hoped this would be the year that she would complete her aim of visiting all seven continents before she turned 30.

She will not have time to do that, though.

She is going to space.

Arceneaux, a physician assistant at St. Jude Children’s Research Hospital in Memphis, Tennessee, will be one of four people on a SpaceX Falcon 9 rocket lifting off from Florida. Scheduled to launch late this year, it is to be the first crewed mission to circle Earth in which no one on board is a professional astronaut.

“I did ask, ‘Am I going to get a passport stamp for going to space?’” Arceneaux said. “But I don’t think I’m going to. So I’m just going to draw a star and the moon in one of my passports.”

This adventure is spearheaded by Jared Isaacman, a 38-year-old billionaire who announced in January that he had bought the rocket launch from SpaceX, the space company started by Elon Musk. Isaacman said at the time that he wanted the mission to be more than a jaunt for the superwealthy, and that he had given two of the four available seats to St. Jude.

One of them will go to a random winner in a sweepstakes contest to raise money for the hospital, which treats children at no charge and develops cures for childhood cancers and other diseases. Hayley Arceneaux, who was told at age 10 by doctors that she had bone cancer. Arceneaux will be the first person with a prosthetic body part to go to space. (St. Jude Children’s Research Hospital via The New York Times)

The other seat, Isaacman said, will be filled by a front-line health care worker at St. Jude, someone who symbolizes hope.

On Monday, St. Jude officials and Isaacman revealed that Arceneaux was the person they had chosen.

Arceneaux could become the youngest American ever to travel to orbit. She will also be the first person with a prosthetic body part to go to space. She was a patient at St. Jude nearly 20 years ago, and as part of her treatment for bone cancer, metal rods replaced parts of the bones in her left leg.

In the past, that would have kept her firmly on the ground, unable to meet NASA’s stringent medical standards for astronauts. But the advent of privately financed space travel has opened the final frontier to some people who were previously excluded.

Dr. Michael Neel, the orthopedic surgeon who installed Arceneaux’s prosthesis, said that although having artificial leg bones means that she cannot play contact sports on Earth, they should not limit her on this SpaceX trek.

“It shows us that the sky is not the limit,” Neel said. “It’s the sky and beyond. I think that’s the real point of all this, that she has very little limitations as far as what you can do. Unless you’re going to play football up there.” 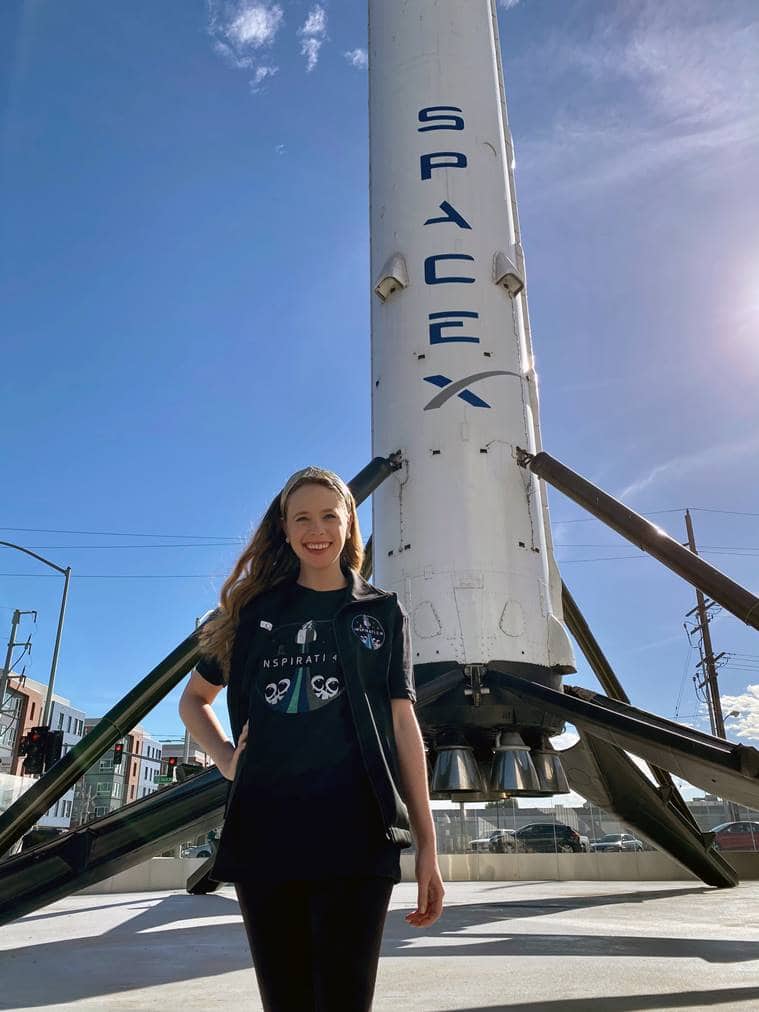 Hayley Arceneaux at SpaceX headquarters in Hawthorne, Calif. Arceneaux, a cancer survivor, will be the first person with a prosthetic body part to go to space. (St. Jude Children’s Research Hospital via The New York Times)

Arceneaux said she hoped to offer inspiration to patients at St. Jude.

“They’ll be able to see a cancer survivor in space, especially one that has gone through the same thing that they have,” she said. “It’s going to help them visualize their future.”

Richard C. Shadyac Jr., president of ALSAC, the fundraising organization for St. Jude, said of Arceneaux, “If anybody was emblematic of the notion of hope, it was Hayley.”

Arceneaux herself did not find out she would have a seat on the rocket until early January. Officials at the hospital had vaguely told her that there was an opportunity they wanted to talk to her about. She said she had thought that “maybe it would be a commercial or maybe giving a speech somewhere.”

Instead, it was an opportunity to be an astronaut.

“I even kind of laughed,” Arceneaux said. “I was like, “What? Yes. Yes, please, that would be amazing.” She then added, “Let me talk to my mom.”

Her mom did not object.

Arceneaux walked into St. Jude for the first time in 2002. She was 10. Not long before, she had earned her black belt in taekwondo, but she was complaining of pain in her leg. Her mother saw a bump protruding over the left knee. The pediatrician in the small town of St. Francisville, Louisiana, where they lived, not far from Baton Rouge, told them that it looked like a cancerous tumor.

“We all fell apart,” Arceneaux said. “I remember just being so scared because at age 10, everyone I had known with cancer had died.”

At St. Jude, doctors provided the good news that the cancer had not spread to other parts of her body. Arceneaux went through chemotherapy, an operation to install the prosthetic leg bones and long sessions of physical therapy.

Even at that young age, bald from chemotherapy, Arceneaux was helping at fundraisers for St. Jude. The next year, Louisiana Public Broadcasting honored her with one of its Young Heroes awards.

Last year, Arceneaux was hired by St. Jude. She works with children with leukemia and lymphoma, such as a teenage boy she talked with recently.

“I shared with him that I also lost my hair,” Arceneaux said. “I told him: ‘You can ask me anything. I’m a former patient. I’ll tell you the truth, anything you want to know.’ And he said, ‘Will you really tell me the truth?’ And I said yes.”

His burning question: “Are you the one going to space?”

Arceneaux had to dodge. “I said, ‘Well, we’ll see who gets announced,’” she said. “But I think he knew because then he and his dad were like “Yeah!” and high-fived.”

Arceneaux and Isaacman have visited SpaceX’s headquarters in California three times to meet with engineers and to start planning the trip. Unlike the missions that SpaceX flies for NASA, this one will not go to the International Space Station but will instead orbit Earth for three or four days before splashing down off the Florida coast.

“She’s got an adventurous spirit,” Isaacman said of Arceneaux. “And now she gets to travel to the stars, which is pretty cool.”

It will still be a few more weeks before they know who their companions will be.

The St. Jude sweepstakes, publicized in a television commercial that was broadcast during the Super Bowl two weeks ago, will run through the end of the month. It has so far raised about $9.5 million. That seems to fall far short of the $100 million Isaacman has himself committed to St. Jude, or the overall goal of $200 million. But Isaacman and Shadyac said that the fundraising effort would go beyond the sweepstakes and that they were pleased with the progress.

“This is going to be a campaign that’s going to extend all the way until the launch,” Shadyac said.

The sweepstakes is structured in a way that effectively limits the size of donations. One entry is free. A minimum donation of $10 buys 100 entries, and each additional dollar donated buys 10 more entries, up to $1,000 for 10,000 entries.

There were some pricier options available that are now sold out. For example, Isaacman will give a donor who contributed $100,000 a ride in the Russian-built MiG-29 jet fighter that he owns. The donor will also get a trip to watch the launch at Kennedy Space Center in Florida. But that donor still has just 10,000 entries in the sweepstakes, the same as someone who donated $1,000.

Isaacman said this was a deliberate choice to prevent a wealthy person from trying to snap up the grand prize of a trip to space by buying millions of entries.

“Is it going to represent all of the people of Earth and not just rich white guys?” Isaacman said.

The fourth SpaceX seat will go to the winner of a contest sponsored by Isaacman’s company, Shift4, which sells credit-card-processing terminals and point-of-sale systems to restaurants and other businesses. The “Shark Tank”-like competition calls for entrepreneurs to design an online store using Shift4’s software and then post a video on Twitter describing their business.

As of last week, fewer than 100 people had submitted complete entries. “It means if you had made a Shift4 shop and entered it, you’ve got pretty amazing odds,” Isaacman said.