As smartphone sales continue to boom during the pandemic, Samsung on Monday launched the new Galaxy F62 to cash in on the growing demand for mid-range phones in India. The Galaxy F62 is very much inspired by smartphones in the Galaxy M-series, as the handset is billed as delivering fast performance and long battery life for a mid-range price. The Galaxy F62 is available from February 22 through Samsung stores, Flipkart, Reliance Digital and will cost starting at Rs 23,999.

Samsung is known for its great displays. The mid-range phone Galaxy F62 has a 6.7-inch sAMOLED+ display and comes with a hole-punch selfie camera cutout in the center. The 4G-ready handset is powered by Samsung’s own Exynos 9285 processor and comes in two versions, with either 6GB of RAM and 128GB of storage or 8GB of RAM and 128GB of storage, priced at Rs 23,999 and Rs 25,999 respectively.

The Galaxy F62 is the latest attempt from Samsung to bring premium features to the mid-range segment. The main rear camera uses a 64MP primary sensor. There’s also a 12MP ultra-wide-angle lens, a 5MP macro lens, and a 5MP depth sensor. Samsung says it has added a dedicated night mode, a super slow-mo mode as well as the Single take camera mode. The device also includes a 32MP front camera. 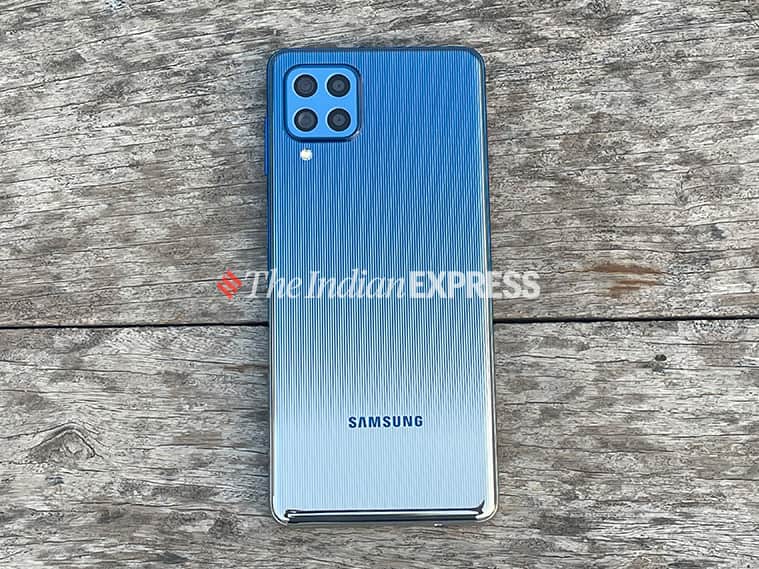 Although the back is made out of plastic, the Galaxy F62 still looks premium. (Image credit: Anuj Bhatia/Indian Express)

Despite its mid-range price, the phone comes with a 7000mAh battery with a 25W fast charger. There are two colour variants at launch, Blue and Green. The back is made from plastic, or glastic as Samsung likes to call it.

Samsung remains India’s second-largest smartphone maker, according to various research agencies. A large portion of its sales (at least in India) comes from the popular Galaxy M and A series. The latest Galaxy F62 will compete against the likes of Xiaomi Mi10i and OnePlus Nord. However, unlike these phones, the Galaxy F62 lacks 5G support.