It’s a fascinating time to buy a new game console. The PlayStation 5 and Xbox Series X has recently hit the market, whereas the Nintendo Switch will be entering its fifth year. Looking at the next-generation consoles from Sony and Microsoft, one thing is clear buying a new console has become slightly more complicated. Not all consoles are the same. The Xbox Series X and Series S are aimed at different audiences. The PlayStation 5, on the other hand, is available in two variants but technically both are the same. Nintendo Switch, meanwhile, might not be as powerful as the new-generation Xbox Series X and PlayStation 5 consoles, but its strength lies in its form factor and original IPs that you won’t find on rival platforms. That being said, each console has its pros and cons. So which console should you get? We’ll help you pick.

The PS5 is impossible to find, and while many blame Sony for the botched up launch, the fact is that the pandemic has made this next-gen console more popular than ever. Anyway, beyond the hype, the PlayStation 5 feels fast and its processing speed dwarfs that of the PS4. Spider-Man: Miles Morales runs at 60 frames per second on the PS5, but the game already loads fast on the PS4. Right now, the problem with the PS5 is that there aren’t many games that take advantage of a custom CPU with 10GBs of RAM and a custom GPU. You can play a game in 4K resolution, with support for up to 120 frames per second. Sony is also pushing 3D audio in a big way with the PS5.

The best thing you can do right now is to wait for next-gen games to arrive on the platform. And they will – after all, Sony has already teased a number of high-profile titles for the PS5. Sony’s new console has the advantage of its immediate rival in exclusive games, the monumental success of the PS4, and the DualSense which is already shaping up to be the best controller ever made for a console. Let’s not forget — the PS5 also offers backward compatibility with the PS4 games and its PlayStation Plus membership is worth subscribing to. Is the PS5 worth buying? If you don’t need the latest and greatest, you can save money by buying the PS4. The only reason not to wait is if the promise of first-party games like the next “God of War” will arrive only on the PS5. Should I buy a PS5 or PS5 Digital Edition?

The top model of PS5 will set you back by Rs 49,990 but it has a 4K Blu-ray player built-in. The PS5 Digital Edition, meanwhile, has the exact same hardware as the standard PS5 but comes without the disc drive for a price of Rs 39,990. It will play the same games as the regular PS5 like Marvel’s Spider-Man: Mile Morales and Demon’s Souls, but you have to download them digitally. That means you won’t be able to play 4K Blu-rays, Blu-rays, or DVDs. But the Xbox Series X is facing the same problem as the PlayStation 5: the lack of killer exclusive titles. However, in the case of the PS5, Sony at least promising impressive first-party that will eventually come to the console. The only saving grace for the Xbox Series X is GamePass, which is a subscription-based game service.

The Xbox Series X is no doubt a powerful console, but it will have the same third-party games as the PS5, including Assassin’s Creed: Valhalla and Call of Duty: Black Ops Cold War. Gamers buy a console for its exclusive titles and the Xbox Series X does not have any. “Halo Infinite” is coming but it will debut later this year. 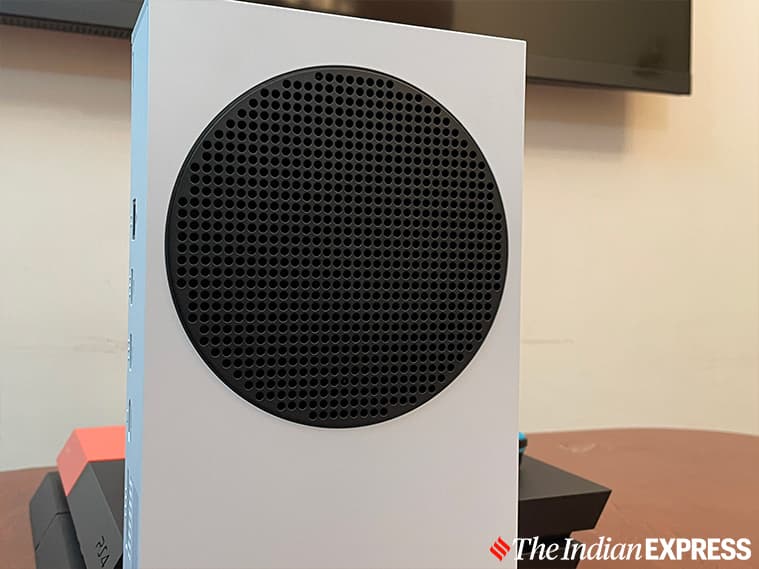 The Nintendo Switch is a symbol of pop culture that shows how a single-purpose gadget could find mass success. The Switch might not have high-fidelity graphics, despite that, it became so successful. Nintendo’s strength has always been its ability to connect with wider demography and the Switch encapsulates all of this. It is both a home console and an excellent portable gaming device, making its reach beyond the core gaming demography. The fact that Nintendo controls everything, from design, R&D to making original IPs in-house, gives the Switch an edge over the competition. The Switch has hit games like Super Mario Odyssey, The Legend of Zelda: Breath of the Wild, Animal Crossing: New Horizons and Pokemon Sword and Shield, making it the only console where you can play these titles. The Nintendo Switch lacks popular third-party titles, however. The situation is quickly changing with the arrival of titles like The Witcher 3: Wild Hunt and Doom Eternal. Should I buy a Nintendo Switch or Switch Lite?

Like Sony and Microsoft, Nintendo too sells two versions of its console: the standard Switch and Switch Lite. The big difference between the Switch and the Switch Lite is how you want to use the console. The regular Switch offers a dock that allows you to hook up your console with the TV and play games on the big screen. Since it is a hybrid console, you can also play games in the handheld form factor. The Switch Lite is handheld-only, and has a smaller screen. Both consoles have the same hardware and run the same games. Probably the most important difference for most people is the price-tag. The Switch Lite is much cheaper than the standard Switch, costing roughly Rs 20,000 in India.

Previous Article WikiFlower Mystery: Wikimedia on why it got 90 million daily requests from India for this flower
Next Article Volkswagen taps Microsoft’s cloud to develop self-driving software