The domination of the PlayStation 4 made Sony the king of the gaming world, and while that device is still alive and getting new blockbuster games one after the other, the Japanese company now wants to carry the legacy forward with the PS5. Its next-generation game console feels amazing, everything from the graphics to the new DualSense wireless controller. It is also a masterclass on what a future-proofed device could look like. But is it the best option for a pandemic-hit world? Read our review:

The PS5 is a big console. At 15.4 inches tall, 10.24 inches deep and 4.09 inches wide, it’s the biggest game console ever made. It looks intimidating and is also heavy and tall. Before you buy the PS5, you need to figure out whether to keep the PS5 laid horizontally or in a vertical position. I am not too sure how it actually looks on a TV shelf in your home, but I have kept the PS5 vertically. Because the PS5 is asymmetrical, Sony provides a base that needs to be held in with a screw when it’s oriented vertically and clipped to the side of the console if you want to put it out horizontally. The PS5 has two white fins on the sides of the console. (Image credit: Anuj Bhatia/Indian Express)

The PlayStation 5 has a distinctive look with the giant white fins on either side of the console. Its unusual white and black colour scheme, glossy center and blue LED lighting that illuminates the PS5’s inner edges make it look like a device that belongs to the future and not to the present. While the PS5 has this retro-futuristic feel to it, I am not too sure about the durability of its polar-white fins. They are extremely thin, and could break off if the console takes a fall for instance.

Sony is selling two models of the PlayStation 5. One with a disc drive and a digital-only version. My review unit features a built-in disc drive, but both variants look the same – except the “regular” version has the “hump” on the right/bottom white panel. The front of the console has one USB-A and one USB-C port. In addition, there are two more USB-A ports on the back, an Ethernet port, and an HDMI 2.1 port on the back. Then there’s one button to turn on the console and while the second is an eject button for discs. 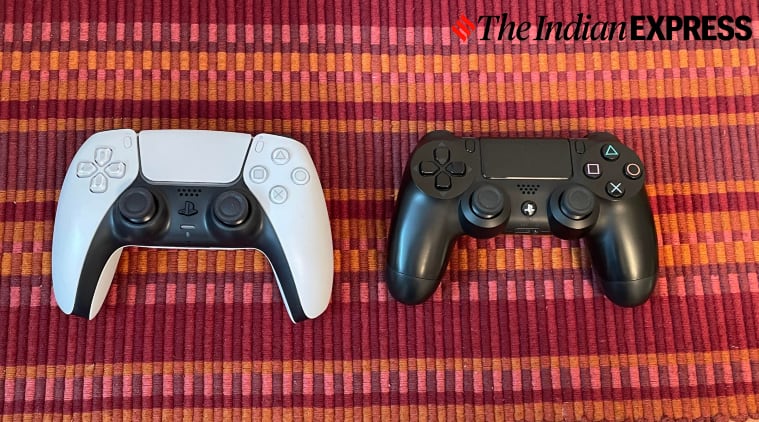 Perhaps the most interesting part of the PlayStation 5 is its DualSense controller that comes packed with haptic feedback that allows you to feel the game. The DualSense is different from the DualShock 4 that came with the PlayStation 4. The layout is identical to that of the DualShock 4 wireless controller, but now there is a redesigned home button, it charges via USB-C, the grips are textured, and even the thumbsticks are more responsive. The new controller is heavier and larger than the DualShock 4 but feels absolutely remarkable. The PlayStation 5’s home screen now looks more streamlined – and it’s also highly customisable. The layout is natural and easy to navigate. I have always liked user interfaces and layouts on the PlayStation consoles, right from the PS3 to the PS4 and now PS5. The Control center can be accessed with a press of the PlayStation button on the DualSense wireless controller and then you can view several key functions on the bottom for accessing your friends’ list, notifications, trophies, download status, system settings, etc.

The best thing about the PS5’s user interface is how easy it has become to find games and media on the console. You no longer need to open the PlayStation Store separately or search for free games as part of the PlayStation Plus. The store is now a part of the UI, which is a much better way to find games. One of the new features of the PS5’s UI is Activity cards, which in a way breakdown a game into activities. For instance, one of the activity cards for Astro’s Playroom tells the player the in-game progress or how much time it will take to finish the current level. Then there is the ability to share a screen and watch a friend playing the game live through a picture-in-picture mode. 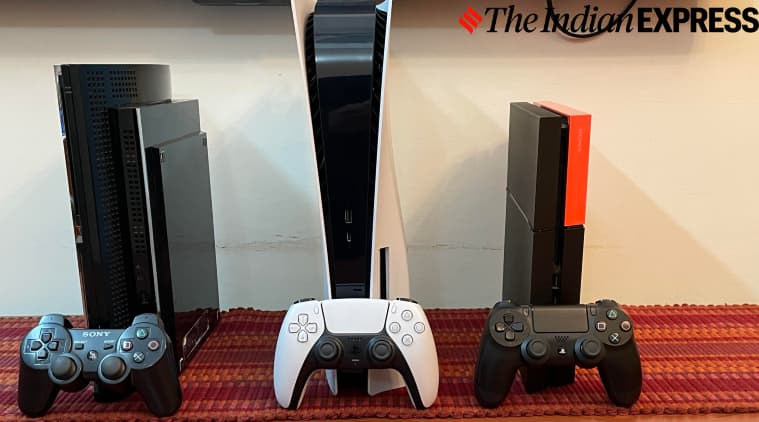 A next-generation console also needs the hardware to show its prowess. Inside the PS5, the game console features a custom eight-core AMD Zen 2 CPU clocked at 3.5GHz (variable frequency) and a custom GPU based on AMD’s RDNA 2 architecture hardware that promises 10.28 teraflops and 36 compute units clocked at 2.23GHz (again variable frequency). It also boasts 16GB of GDDR6 RAM and a custom 825GB SSD. The PS5 is a powerful console, and you can see why. But what really shines through the PS5 is the use of a fast SSD. In practice, the SSD wipes away load times and allows you to quickly jump between games. Spider-Man: Miles Morales loads faster on the PS5, and because the console has beefy hardware and improved graphics, the game looks noticeably better.

To be clear: you can play PS5 games at 4K UHD resolution and a frame rate of up to 120fps with ray tracing enabled; plus, there is also support for 3D audio. That said, you would also need the compatible high-end 4K TV to take advantage of it. I could see some improvements on 55-inch 4K HDR TV. For instance, I was blown away by playing Spider-Man: Miles Morales which ran at 4K 60 fps — the game felt responsive and the graphics were top-notch. Had I owned a 32-inch HD TV, the PS5 would have not made much difference. The PS5, however, has only 825GB solid-state drive (SSD). It will quickly fill up once you start downloading games. For those opting for the digital-only console, it could be a problem in the long run. Thankfully, the PS5 does support external hard drives but they won’t be as fast as the SSD. As I have mentioned earlier, Sony loaned me the PS5 with a disc drive, meaning I can physically buy games from Amazon and play them on the console. Can you watch Ultra-HD movies on PS5? Yes, the PS5 can play 4K UHD Blu-rays as well as standard Blu-rays in 1080p and regular DVDs. However, you need to shell out Rs 49,990 for the model that comes with the disc drive. The PS5 Digital Edition excludes this disc slot and hence costs just Rs 39,990.

The PS5 is technically a powerful console, but Sony has also made it backward compatible. Beyond the teraflops and breathtaking graphics, the PS5 can play most of your PS4 games (support for running PS3/PS2 games is missing). If you, like me, own a lot of digital PS4 games, running them on the PS5 is an easy task. All you need to sign in to your PlayStation account, and the PS4 games you already own digital will appear with a small “PS4” badge.

I have not tested every PS5 title available on the market. But I am aware that the PS5 currently lacks blockbuster games that should have appeared by now. Yes, Spider-Man: Miles Morales is a fascinating game to play on the PS5 but the title is also available on the PS4. The Demon’s Souls remake is another compelling title. You can play a bunch of third-party titles such as Assassin’s Creed Valhalla and FIFA 21 but again I can play the same games on the PS5’s predecessor. The situation isn’t entirely different for the Xbox Series X, Microsoft’s next-gen console. But I am not hopeless. Sony has already shown some killer exclusive titles that are in the works for the PS5, but they are not available just yet. You need to play Marvel’s Spider-Man: Miles Morales, if you are planning to buy the PS5. (Image credit: Anuj Bhatia/Indian Express)

Sony PlayStation 5 review: Should you buy it?

The PlayStation 5 is a step up from its predecessor and many consumers may want a better game console, but you won’t miss the thrill if you stick with the PS4 for another year or so. I am not stopping you to buy the PS5; it truly stands out but there aren’t many games that take advantage of the hardware and DualSense wireless controller. Even if the games start appearing on the PS5, the average user may have trouble seeing the improved graphics the new console offers over the PS4. To experience the PS5’s graphics, you might need to invest in a high-end 4K HDR TV that supports features like 120 FPS.

Previous Article Mishandling of farmers’ agitation has damaged PM Modi’s carefully cultivated image as a world statesman
Next Article Classrooms are all about engagement between a teacher and students, where they can learn and grow