NASA’s Perseverance rover has successfully landed on Mars, and it is the most advanced rover that the US space agency has sent to the red planet till date. NASA confirmed the the successful touchdown in mission control at its Jet Propulsion Laboratory (JPL) in Southern California at 12:55 pm PST, which was around 2.25 am for India.

Even, Google Search is celebrating NASA’s successful landing with celebratory fireworks, when you search for NASA Perseverance or NASA Mars rover 2021. Here are top points to keep in mind about NASA’s historic landing.

The Perseverance rover is different from any other Mars mission because this one will try and collect Mars sample, which would later be brought back to Earth. Getting these samples back to Earth won’t happen before 2031, and NASA is collaborating with its various centres and the European Space Agency (ESA) in order for this mission to succeed. But Perseverance is the first step in that journey.

Perseverances is searching for signs of life

The Mars rover is not just collecting sample rocks to bring back to Earth, but it is also the first rover actively looking for sciences of microbial life on the planet. That’s also why the rover landed at the Jezero crater, believed to be an ancient lakebed and river delta.

According to NASA’s press statement, scientists have determined that 3.5 billion years ago, Jezero crater had its own river delta and was filled with water. Hence, this area could be vital in the search for signs of ancient microbial life.

“The rover is focused on astrobiology, or the study of life throughout the universe,” explains NASA’s mission page, adding it will search for “telltale signs that microbial life may have lived on Mars billions of years ago.” These core rock samples, which could hold clues to life on Mars, will be collected in metal tubes. 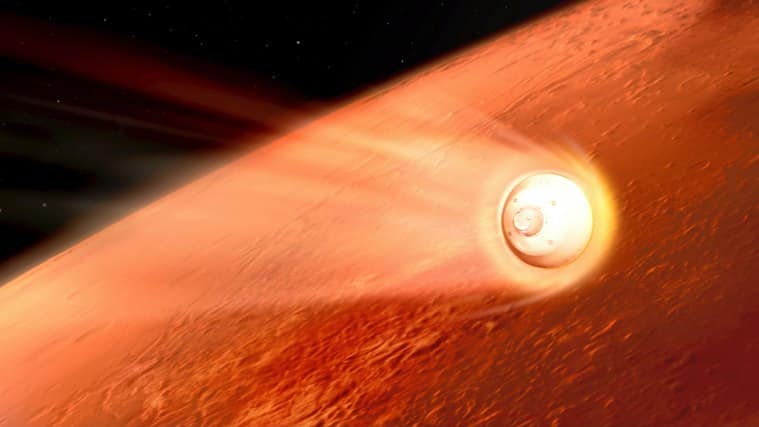 In this illustration of its descent to Mars, the spacecraft containing NASA’s Perseverance rover slows down using the drag generated by its motion in the Martian atmosphere. (Image credit NASA/JPL-Caltech)

Perseverance is the size of a car, 203-day journey

The Mars rover is about the size of a car, and weighs 2,263-pound (1,026-kilogram). It is the largest one that NASA has sent to the planet till date.

But it won’t start hunting for samples immediately. It will undergo several weeks of testing from NASA’s Mission control and after that it will explore the Jezero Crater on Mars, where it landed. It took Perseverance 203 days to get to Mars, traversing 293 million miles or 472 million kilometres.

The rover has seven primary science instruments. It also has the most cameras ever sent to Mars, and has a “complex sample caching system”, according to NASA. This photo made available by NASA shows the second image sent by the Perseverance rover showing the surface of Mars, just after landing in the Jezero crater, on Thursday, February 18, 2021. (Image source:AP)

“Perseverance is the most sophisticated robotic geologist ever made, but verifying that microscopic life once existed carries an enormous burden of proof. While we’ll learn a lot with the great instruments we have aboard the rover, it may very well require the far more capable laboratories and instruments back here on Earth to tell us whether our samples carry evidence that Mars once harboured life,” Lori Glaze, director of NASA’s Planetary Science Division said in a press statement.

Mastcam-Z is a pair of zoomable science cameras on Perseverance’s head. These can create high-resolution, colour 3D panoramas of the Martian landscape, according to NASA.

The head also has a SuperCam, which relies on a pulsed laser “to study the chemistry of rocks and sediment and has its own microphone to help scientists better understand the property of the rocks, including their hardness,” states NASA.

The rover also has an instrument to help determine how different layers of Martian surface formed over time. The data could help pave the way for future sensors that hunt for subsurface water ice deposits, explains NASA.

Another instrument on Perseverance will try and manufacture oxygen out of the thin air. This one is called Mars Oxygen In-Situ Resource Utilization Experiment or MOXIE. This is crucial because the planet’s atmosphere is mostly carbon dioxide and future human missions will need oxygen.

Finally, the rover has an ‘Ingenuity Mars Helicopter’ on its belly, which will “attempt the first powered, controlled flight on another planet.” NASA will still have to test out whether the helicopter is able to fly on the red planet, and it could again help in future human missions. NASA notes that once Ingenuity’s test flights are complete, the rover’s search for evidence of ancient microbial life will begin.