Communication-based apps getting suddenly popular amidst an ongoing crisis isn’t new. Take the WhatsApp privacy policy crisis from last month, that allowed rivals Signal and Telegram to amass a large user base in a matter of days. Now, Bridegfy, an offline messaging app for Android and iOS users, is gathering a large number of users in the middle of the Myanmar military coup. Here is all you need to know about the offline messaging tool, including how it works and how secure the platform is.

What is Bridegfy and how does it work?

Being an offline communications app, Bridgefy allows nearby users to communicate without the need of a data network or SMS. Instead, the app operates on a mesh network. What this means is that it uses other nearby Bridgefy users to relay your messages via Bluetooth.

Bridegfy’s range requires at least one other user within about 330 feet. Ideally, the more Bridgefy users between you and the receiver, the better. The app requires internet connectivity in the beginning to set itself up and sync your contacts, following which you can send messages to nearby users.

It also allows you to share live location with another Bridgefy user. There is also a broadcast feature that allows you to communicate with nearby users even if they are not in your contact list.

This makes Bridgefy ideal for scenarios where a lot of users know that others are going to be present. This could either be a college function or something as big as a concert or a protest.

But Bridgefy becomes completely pointless if you have no other Bridegefy user within Bluetooth range. 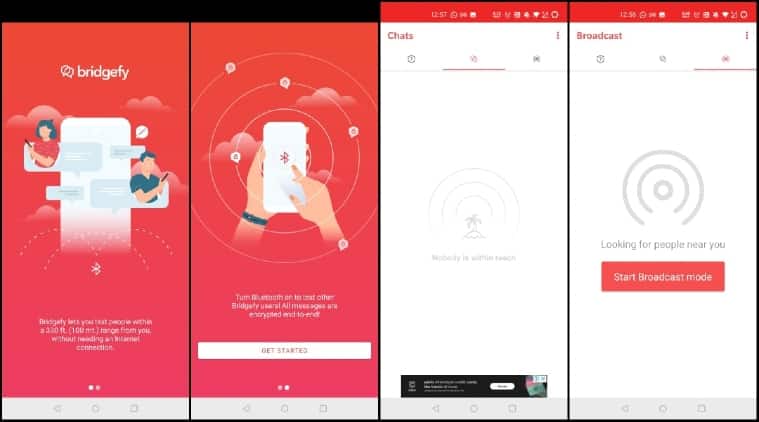 Bridgefy allows you to use broadcast messages to reach nearby users including those not in your contacts, which could be life-saving during natural disasters like floods. (Image Source: The Indian Express)

Why are so many people turning to Bridgefy in Myanmar?

Myanmar is in the middle of a military coup d’état since Monday, February 1. The country’s military powers has seized control and political leaders including the National League for Democracy (NLD) leader Aung San Suu Kyi and President Win Myint have been detained. Currently, Myanmar has been placed in a state of emergency for a year.

After communications was cut off in various parts of Myanmar including capital Naypyitaw and main city Yangon, people looked towards other means that do not rely on SMS or internet connectivity. This is where Bridgefy came in. The app even tweeted on February 2 sharing that it had been downloaded by over 6,00,000 users in “just a few hours”, a number that could be much higher by now.

We’re grateful to share that the Bridgefy App was downloaded more than 600,000 times in #Myanmar today, in just a few hours. Hopefully, people will find it helpful during tough times. Please stay safe!

Bridgefy was also used during anti-government rallies in Thailand. Other apps that work on similar Bluetooth-based networks like Firechat have also been used during protests in Iran and Iraq. Bridgefy also became popular in India during the 2019 Anti-CAA protests, when communications were cut down.

While there are multiple parties involved in getting your message to your receiver, the natural question that arises is whether your messages can be intercepted by those in the middle. Bridgefy has assured users that this is not possible due to “top-notch” encryption and other security improvements that the app has been implementing over time.  However, this wasn’t the case until recently.

Until 2020, many security experts have questioned the app’s working and policies in terms of privacy and security. This became crucial in the context of protests, during which Bridgefy was slowly becoming a go-to communication tool. Subsequently, Bridgefy temporarily took back its encryption promises in June 2020. Check out the tweets below.

No part of the Bridgefy app is encrypted now. The protocol we were using was ok but wasn’t safe enough, so we removed it.

In the following weeks we’ll be releasing a new version that will be encrypted with top security protocols.

A quick reminder that Bridgefy is simply a tool for people to communicate.

Although the Bridgefy app has gone viral due to several political issues, and we’re happy to help, we do NOT take sides in any political conflict, nor do we share user information with any organization.

To those in #India that are downloading our app: if you need to share download or information links, these are the ones we recommend:

Today, the latest version of the app on the Play Store mentions that end-to-end encryption is now being used to protect messages. The description also mentions that other Bridgefy users will not be able to know when you’re participating in a conversation and neither can they pretend to be someone else.

“Future releases will include more security features, but rest assured that the most important changes to Bridgefy’s security are now in place,” says the description. However, features like phone number verification and unique usernames are yet to be implemented and should make it a more trustable platform in the future.

Previous Article In agriculture, R&D needs attention, subsidy bias must be corrected
Next Article Union Budget 2021 will rank as the politically boldest budget of the Narendra Modi government since 2014