The existing impasse around the farmers’ protest against the farm laws continues despite the intervention by the Supreme Court. I’m not going to comment on the merits or demerits of the new farm laws or the issues involved. However, let’s try to understand it from the broader perspective of the whole economic ecosystem.

Agriculture had been the dominant sector of the economy since the dawn of civilisation, until its supremacy was replaced by the first three industrial revolutions beginning 250 years ago. The industrial revolutions were also accompanied by the emergence of capitalism and a market economy. The three industrial revolutions created huge job opportunities and helped with the assimilation of the agrarian workforce into the secondary and tertiary segments of the economy. However, even today, according to the estimates of the FAO, about 60 per cent of the global population is still dependent, directly or indirectly, on agriculture. Yet, its contribution to the world GDP is just about 4 per cent — a dismal figure in comparison to the combined contribution of 90 per cent of the secondary and tertiary sectors of the economy.

Agricultural produce at the primary level is disproportionately insignificant, given the size of the population that it is required to sustain. The Indian scenario isn’t much different, except that the GDP contribution of this sector (12-15 per cent) to the economy is somewhat higher than the world average. This is a case of sectoral income inequalities.

To minimise the dependency of a vast population on agriculture, the only plausible and time-tested solution adopted was to shift it to the industrial and services sectors. This was facilitated by the creation of a very large workforce in technology-driven sectors during the earlier three industrial revolutions. However, now, the tables appear to be turning as some reports indicate that there will be net job losses during the fourth industrial revolution due to artificial intelligence, robotics, cognitive analytics, 3D printing, genomics and, overall, due to a host of new technologies that are fusing the physical, digital and biological worlds, impacting all disciplines of life, economies and industries, and even challenging ideas about what it means to be human.

And, therefore, the doors that were historically open during the last two centuries are closing down to assimilate the huge population from agriculture.

Against this backdrop, it has become imperative to rethink the economic order to contain the turmoil caused by the scarcity of livelihood opportunities, especially in agriculture.

The central and state governments are continuously trying to improve the economic status of farmers; however, these efforts do not get translated into a sustainable increase in the per capita income of the farmers.

Instead of addressing the problem faced by the farmers alone, there is a need to take a comprehensive view for a new economic model in the backdrop of the highly distorted economic inequality, impending large-scale job losses sealing opportunity for shifting people from agriculture to other sectors. The country needs to adopt pragmatic, disruptively innovative thinking commensurate with the currency of the time. From this perspective, many new innovative models could be designed.

I am proposing one such solution that could be employed to address the issues haunting the agrarian economy and pave the way for retention of the population in the agriculture sector by bringing rural average household income closer to those engaged in manufacturing and services sectors without making any reference to the farmers’ agitation, or the new farm laws, continuance or abolition of APMCs, MSP, DBT, subsidies etc. The proposal is simple. However, it would require the deployment of digital technologies that are being used commercially on a large scale. It would not be an impediment as the country is blessed with the availability of such technologies.

My proposal involves fixation of prices of all the agricultural primary goods on a day-to-day basis or periodically by the local farming community. Once such prices are discovered and fixed, the first trader will have to procure that commodity at a price not below the price so fixed. The subsequent sales or trades can happen depending on the market forces. I propose a name for this scheme: “First Trade Minimum Price” (FTMP).

The exercise of fixing prices could be enabled through the use of robust digital technologies that are easily available. The organisational structure, statutory/regulatory mechanisms, the use of technologies are the aspects of detailing and not at all difficult to conceptualise and implement. As the proposal is extremely simple, it wouldn’t take a long gestation period to operationalise it. It also doesn’t take away anything currently available to the farmer and, hence, I do not apprehend any resistance from them or for that matter from any other quarter.

This proposition is perfectly aligned with the existing accepted practices. It’s a fact that the GDP contribution of the secondary and tertiary sectors combined is more than 80 per cent and it’s also a fact that the prices of products or the services of this 80 per cent economy are determined and decided by the manufacturers of the products or the service providers. My proposition is to enable the farming community also to decide the prices of their products like the secondary and tertiary segments of the economy.

The country and the government may consider this suggestion to address the issue from all the dimensions and with an eye on the future of the economic well-being of the masses.

The writer, a retired IAS officer, is a former principal secretary to the government of Maharashtra 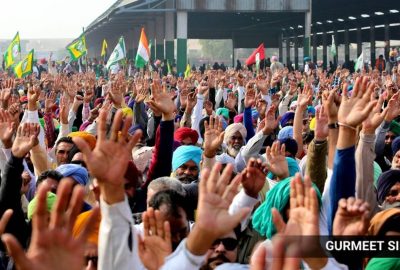