Delhi is on the verge of receiving its next master plan, a blueprint that has a bearing on how it evolves over the next 20 years and addresses the myriad challenges it faces. When the draft master plan is released for suggestions, the residents will only have a few days to read, comprehend and respond to the complex and imposing document. Several contradictions exist to the well-imagined preparation of the planning process. A recent study by Main Bhi Dilli campaign and Indo-Global Social Service Society (IGSSS) titled ‘Assessment of People’s Awareness on Delhi’s Master Plan 2021-41’ revealed that 80 per cent of the residents have not heard about Delhi master plan and hardly anyone knows how to use or access a land use map. They have no awareness of how to give suggestions or raise objections on the master plan, nor the knowledge of which agency prepares the plan. None of the respondents has read the last master plan report and the majority think it is the Delhi government and not the Delhi Development Authority (DDA) which makes the plan.

The case is not particular to Delhi — this is typical to any city in India. Public engagement in the planning process is viewed as a hurdle with minimal tokenistic consultations. The mandatory suggestion and objection phase does not create adequate spaces for people to critique, offer feedback, or share their collective needs and aspirations. Consequently, it becomes rather late to include and alter anything in the penultimate stage. The COVID-19 pandemic has revealed that over the last hundred years of urban planning (or the lack of it), exclusively expert-led city planning has worsened social inequalities and made cities increasingly unliveable and exclusionary, turning their backs on its people and the workers that make the cities.

There are several challenges that the conventional top-down master planning framework poses. First, it has the inherent weakness of being a “master” plan. The moniker signifies that planning remains far from involving the “Janta Janardhan”. Expert-driven mechanisms leave out the nuances and lived realities of the people and prefer straight lines and maps that look more planned. Second, the master planning process is viewed often from the lens of “implementation”, with the naive assumption that all plans designed by experts are for wider social benefit. The multiple planning agencies, the diverse land use — ownership patterns and above all the lack of data makes implementation a near impossibility. Third, planning is assumed to be a non-partisan and objective process, where objective and rational decisions are taken. However, this also is a deeply contested socio-political process that makes it imperative to engage with. Fourth, what distinguishes Indian cities and cities in the Global South is the ever-pervading informality. Whether living or working conditions, the informal constitutes the majority and state-led planning has only tried to remove the informal practices — often labelled as zoning violations or encroachments. This leads to further marginalisation of the urban poor and worker groups. Fifth, the development plans remain undermined and irrelevant. Rather than cynically viewing urban planning as an apparatus in the arms of the State and viewing Indian cities as unplannable, we wish to place the focus on the importance of planning by people.

The DDA act of 1957, cites development as – “with its grammatical variations, means the carrying out of building, engineering, mining or other operations in, on, over or under land or the making of any material change in any building or land and includes redevelopment;” – devoid of the meaning of social purpose that betters residents lives and living conditions. The DDA Act further mandates the invitation for people’s suggestions and objections, but only when the draft is ready, with little scope of participation post that late stage. The Urban and Regional Development Plans Formulation and Implementation (URDPFI) guidelines, though marginally inclusive, say that at every level of this process, public participation and representation in the form of focus group discussions and consultation is necessary but does not set a mandate for peoples’ contribution. Well-meaning officials and consultants like the National Institute of Urban Affairs (NIUA) have taken a few steps to involve public participation in the process, but they are part of the rare exceptions. They have released an online Google form asking people for five ideas on how they ‘’envision’’ their city for the next 20 years but these steps, though well-intentioned, seem inconsequential in the face of the challenge of urban planning as we see it in Delhi. As concurred by the assessment report, none of the Delhiites surveyed knew of the master plan process, none had visited the DDA website – leave alone filling up the google form in English, a language that only a minuscule section of the elite is comfortable with.

Public engagement in the process of making the plan is critical in ensuring that plans are taken seriously and implemented with people’s participation. There are examples from the Global South, though from diverse socio-cultural milieus, that offer many interesting lessons for us. The creation of urban policies in Brazil and other Latin American countries in the last 30 years is one of the best examples of the efforts of citizens to make city planning democratic and transparent addressing the social inequalities. The City Statute of Brazil brings to fore the importance of the “social function” of planning and the need for “a path to plan, produce, operate and govern cities subject to social control and participation”. In Singapore, public engagement is becoming a norm in the planning and redevelopment process.

For Delhi, to make people co-creators in this process in the immediate, the DDA needs to lead the way and conduct awareness workshops on MPD41 at the zonal and councillor ward level to help prepare people for the “feedback and suggestion” phase. These units must also then be transferred forward as Local Area Plans that are not 20-year plans but smaller locality plans that are implemented by active community participation for smaller durations of five years. Whilst ensuring democratic participation in the implementation, social inclusion considerations for marginal populations must not be left for later – groups such as informal sector workers, homeless, people with disabilities, women, trans people, children, youth, elderly, etc must be identified first and their spatial needs recognised. Master plan documents need to be more accessible. These should be exhibited in locally available walk-in zonal centres where citizens and youth engage with the process of city-making. The documents and maps produced must be available in local languages. The process need not be overly-dependent on Information and Communication Technology or else public participation will be limited to Twitter shares and Facebook likes. At the policy level, nationally, we need a shift in perspective about the relationship between citizens and city planning policy, from one where citizens are the recipients (objects) of public policy to one where citizens are the or focal point (subject) of the policy. As the largest democracy, Indian cities need to set an example and convey that however messy and complicated, democratic planning — by the people, for the people, of the people — is the mantra for us to follow.

Aravind Unni is Urban Poverty Thematic Lead at the Indo-Global Social Service Society. Shalaka Chauhan is a coordinator at Main Bhi Dilli campaign and has been associated with Delhi Roundtable on Solid waste management 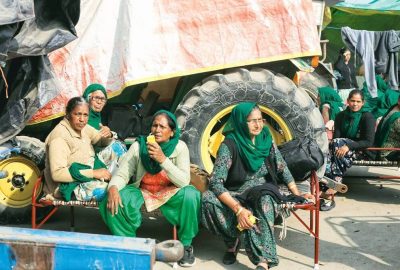 The large presence of women farmers …

The large presence of women farmers …