I vividly remember attending the 2014 Consumer Electronics Show in Las Vegas and returning to India with the PlayStation 4 purchased from GameStop. I have some good memories of getting new PlayStations at different points in my life, right from when I just entered the college to buying the original PlayStation from a vintage shop in London in 2019.

So when I was opening the PlayStation 5 last week, it made me realise how I am emotionally attached to the PlayStation and the games it introduced to the world. Over the years, the PlayStation brand has changed and what it stands for, and the new PlayStation 5 takes a leap into the future. It is still a box and is designed to be a home console – but this time the focus is on refining the experience of playing games. The PS5 takes advantage of your 4K HDR TV, and most importantly games load instantly and run smoother than ever. But what makes the PS5 a truly next-gen console is the way its DualSense controller makes you feel the game. It is truly magical.

So, what do I think after the first 72 hours with the PS5? Let’s find out.

The PlayStation 5 is a Burj Khalifa

Before you even consider buying the PS5, my humble request to you is to create a separate space to keep the console. Whether you position it upright, or lay it on its side, the PS5 will require a lot of shelf space. Luckily, I have a large desk and I somehow managed to keep the PS5 in the vertical position next to my iMac G5. 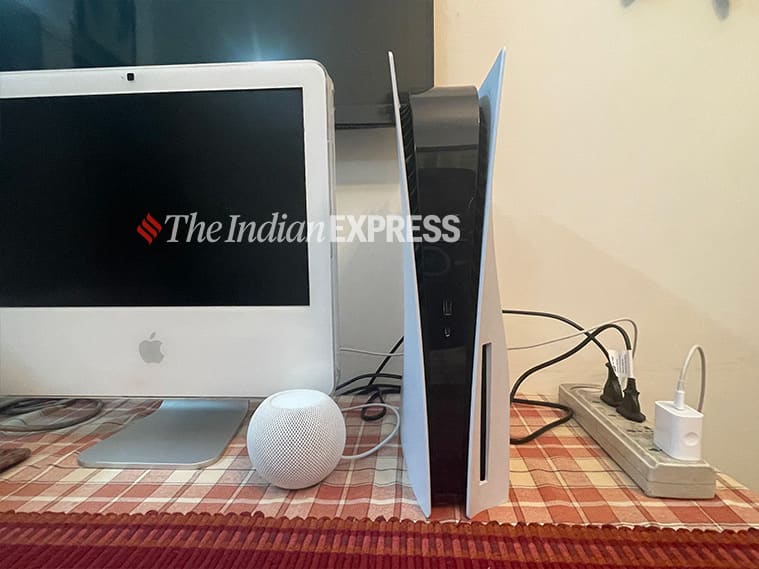 The perception around the PS5’s design has been mixed, and I totally get where the rationale comes from. I liked the design of the PS5. It doesn’t have a box(xy) design, a break from how the game consoles should look like. The white panels, the fins, the illuminated flashing blue light give the PS5 a distinctive look. The model I got for review has the disk drive, and it kind of gives the PS5 an asymmetrical look. There are two buttons, one for power and the second for eject. You also find one USB and one USB-C port in the front. The PlayStation logo etched into the corner of the top panel adds a fresh perspective to the design. I am not sure this has massy appeal.

The DualSense controller is a masterpiece. It genuinely feels next-gen the way it looks and how haptic feedback works while playing games. The DualSense is slightly larger and heavier than the PS4’s DualShock controller. It has a dual-tone design that matches the aesthetics of PS5, and the controller will feel comfortable. It has the home button – which is now an etched PlayStation logo, a built-in mic, and a new create button. However, the DualSense now uses haptic feedback, or simply an advanced vibration effect when playing games. The left and right adaptive triggers offer resistance, as if you are a part of the game. I will encourage you to try Astro’s Playroom, a free game preloaded on the PS5. It demonstrates what the DualSense is capable of. 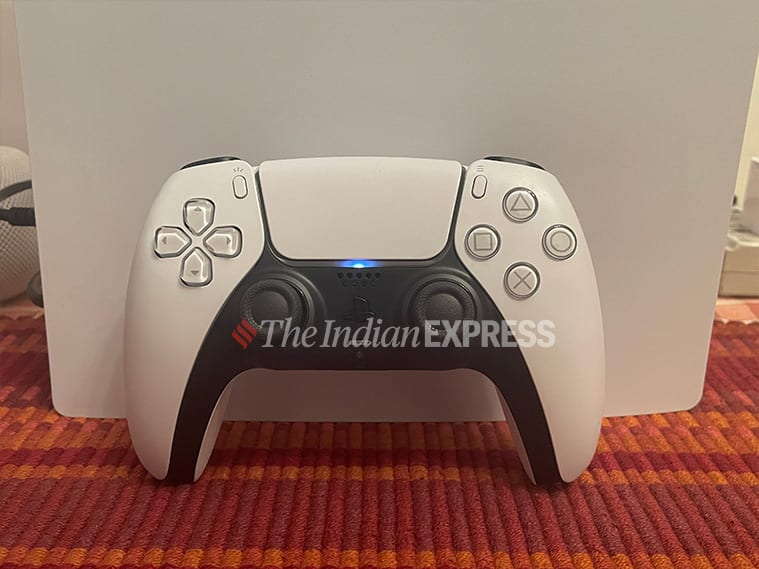 Unlike the Xbox Series X, which has the same old user interface, Sony has redesigned the UI from the ground up on the PS5. The interface is divided into two parts: Games and Media. Each game icon is a row of activity cards, a significant departure from what the UI looked like on the PS4. For example, one of the activity cards for Spider-Man: Miles Morales tells the player that it will take about 20 minutes to complete their current mission. I also liked how easy it is to find games from the PlayStation Store. When you press the PS button on the controller, a new Control Center pops up that lets players quickly switch games, check the battery life on the controller, and power without suspending the game. The PlayStation 5 is a step up from the PS4, and I will stick to my statement. The reason: the next-gen console is completely silent. It does not make a sound, even while playing games. For me, it’s a big change from the PlayStation 4 which is notorious for making loud noises like a jet engine. 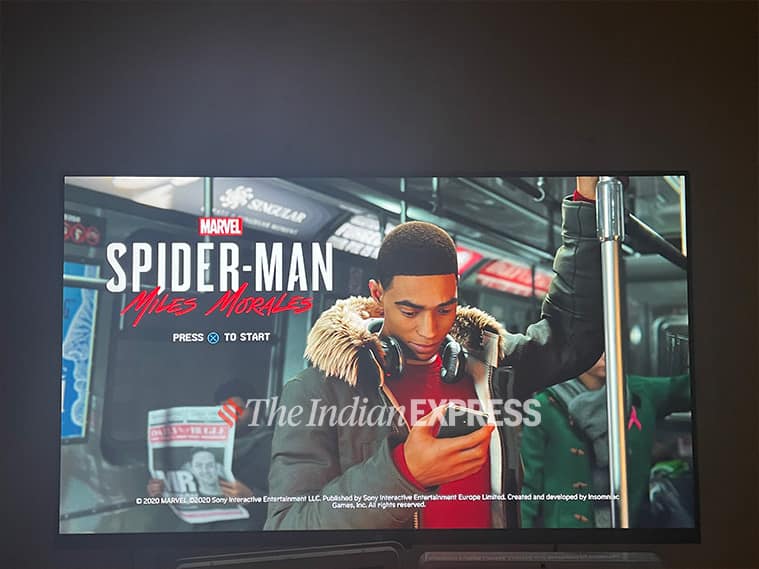 For me personally, the solid-state drive, or SSD is the PS5’s next-gen feature. Thanks to the SSD, Marvel’s Spider-Man: Miles Morales loads in less than 20 seconds. I ran the same game on my PS4, and the difference is clearly visible. Sure, the PS5 is technically superior to the PS4 but SSDs are going to boast faster load times than the last generation. The differences in load times may vary across games, but yes, games will boot up faster on the PS5. 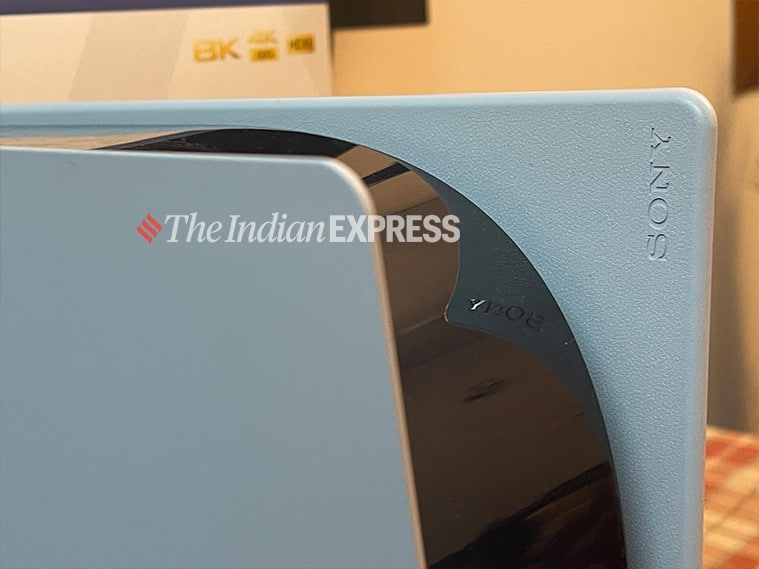 The PS5 looks different from the Xbox Series X both in terms of design and treatment. (Image credit: Anuj Bhatia/Indian Express)

There aren’t too many exclusive PS5 available right now that take advantage of the console’s hardware and graphical enhancement. I played Spider-Man: Miles Morales which is a showcase title for the PS5. It takes advantage of the new systems’ power, with the promise of 4K graphics, up to 60 frames per second, cinematic visuals, and faster loading times thanks to the SSD. Devil May Cry 5 is another title that shows the guts of the PS5. The game allows you to push up to 4K and 120fps with ray tracing disabled. Demon’s Souls is perhaps the best-looking game on the PS5. 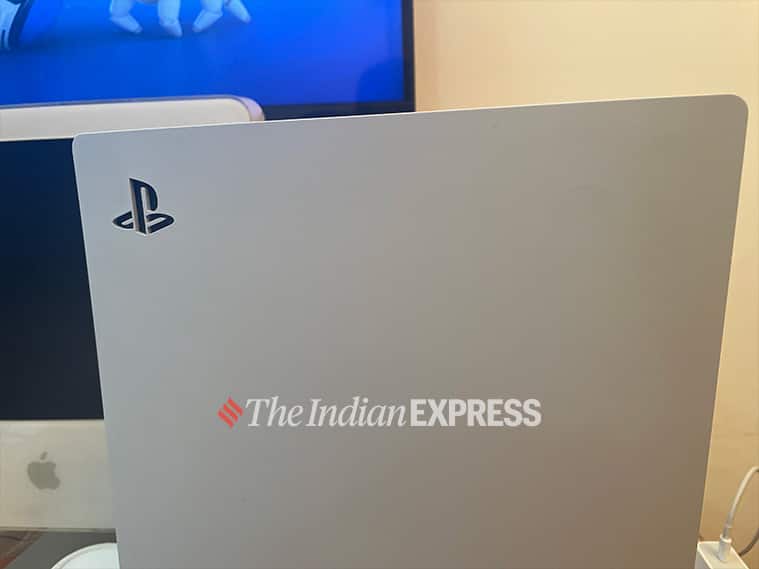 The PS5 appears to be a worthy upgrade to the PS4. That said, the true power of the PS5 can only be demonstrated once the next-gen titles start hitting retail shelves. I won’t say the PS5 is radically different from the PS4 but where it scores is how you’re going to experience games. If you have a TV with 4K HDR and if you care about better graphics, the PS5 is for you. Mind you: the best is yet to come. If you have the extra cash, there is no need to throw away the PS4 yet. That console will keep getting terrific new games for a few more years.

Disclaimer: I am still not done testing the PS5. I will be spending more time playing the games on the console. Currently, I am using the PS5 with a disc drive that is capable of running Blu-rays, DVDs, and PlayStation 4 games. It costs Rs 49,990, but Sony is also selling the PlayStation 5 Digital Edition for Rs 39,990. It looks and performs the same as the standard version – but costs Rs 10,000 less and doesn’t have a disc drive. Expect the PS5 review later on the weekend.